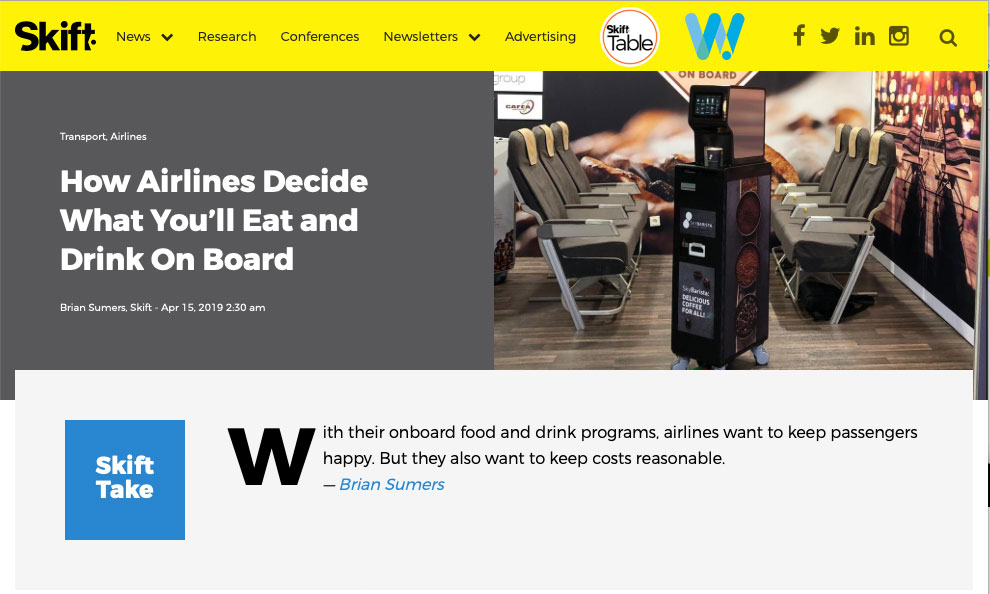 Skift.com about SkyTender at WTCE 2019 and its efforts to bring great taste and more efficiency to the aviation industry

For almost a decade, the Germany-based company SkyTender has promised airlines they can revolutionize how they serve drinks by dropping canned sodas and watery coffee and adding special trolleys that dispense fountain-style sodas and specialty coffees, such as cappuccinos and espressos.

Each year, in April, SkyTender brings its contraptions to the World Travel Catering & Onboard Services Expo in Hamburg, where food and drink companies set up elaborate booths in two gigantic halls, hoping to sway airlines. Some, like SkyTender, seek to persuade airlines to invest in new technology. Others hawk speciality jams, artisan cookies, champagne, craft beer, and cider that airlines can sell or give away on board.

Some vendors view it as a make-or-break event. They are typically firms like SkyTender selling technology without an obvious market beyond transportation. Food producers may see it differently — they can sell to retailers — but they still may hope an airline contract will raise their profile, or boost profits.

Conventional wisdom suggests airlines are cutting back, and catering is less important than a couple of decades ago, but that’s not true. Full-service airlines still spend freely on food and drinks for premium customers, and some, like Delta Air Lines, are increasing budgets for economy class passengers, even on shorter flights. Meanwhile, low-cost carriers want to sell better food and drink, hoping that by chasing the artisan, small-batch trends seen on the ground, they can spur onboard sales.

Catering worldwide will be a $28 billion global industry by 2026, growing about 5 percent per year, according to a report from Transparency Market Research.

But vendors can struggle to break in. Airlines and their caterers are risk averse, and it can take them months, or even years, to make a decision. When evaluating technology, like SkyTender’s carts, they want to know the platform can hold up to the rigors of worldwide service. For food and drink producers, they want to know a supplier can deliver not just in London or New York, but in almost every city where they fly.

The average vendor spends hours in Hamburg meeting with airlines over three days. This year, that group included Thistly Cross, a Scottish cider company led by Peter Stuart. He met with half a dozen airlines, but by the last day, he hadn’t gotten close to a deal.

“I wouldn’t say it’s frustrating — I mean, we’re enjoying the journey — but I’d like to achieve something,” he said. “We just want to be there and meet the right person, at the right time.”

ART OF THE SALE

Earlier this month, SkyTender’s booth on the far edge of one of the halls was buzzing.

She might first offer a Coke, showing how the cart dispenses fountain soda like machines at McDonalds or another fast food restaurant. Then she’d take them for a coffee, offering flat whites, cappuccinos to single and double espressos. The machine delivers both in seconds.

She and her predecessors have been doing this dance since 2011, when SkyTender first brought its technology to Hamburg. Maker admits it may not have been ready then, but more recently, SkyTender has refined it, improving the technology, getting closer to certification and adding partners like Starbucks and Nescafe.

“People talk about innovation, and they pay it lip service,” Maker said. “Nobody dares to take the first jump.”

SkyTender may be close. A European low-cost carrier recently tested its equipment, selling espressos, flat-whites and and cappuccinos to passengers, who, perhaps excited that they had more options than mediocre drip coffee, bought three times as many drinks as usual. A firm order or two may come soon, perhaps from European or Asian airlines.

“Nobody’s going to see you with the door wide open, or open it for you,” Maker said. “You depend on word-of-mouth. Everybody is so worried about, what if it doesn’t make it? I understand that risk. I understand that people do not want to stick their necks out.”

“Sometimes I want to shake airlines and say, ‘What is taking you so long?”‘